Losing your balance in order to find it


When she was 10 months old, Annabelle slipped in the bathtub.  I caught her and, since she was unhurt but a bit scared, said lightly, "Oh no!  Did you fall down?" She laughed, and decided to reenact the fall.  She tipped over on purpose and it was much more fun.  This became a game for the next few weeks, migrating out of the tub onto our bed.  She'd wake up in the morning, sit up, raise her hands overhead, and open her mouth in mock alarm.  "Oh no!" we'd cry, and she would fall into our arms.  Some falls were really just token falls, where she just leaned over quickly and patted the bed with her hands.  Others were melodramatic--head tipped backward, hands thrown in the air, eyes closed, she would collapse onto a pillow.  We started encouraging her to play the falling game whenever friends came over because it was so cute.

But, as with everything in childhood, play-falling faded away too quickly.  Annabelle stopped instigating it.  A week or two later, we were playing on our living room rug and I tried to get the game going again.  "Are you going to fall?"  She smiled, stood, put her hands in the air, and got ready to fall.  But she failed to fall for a long time--she took about 5 steps trying to lose her balance.

I should mention that Annabelle hadn't yet figured out how to walk at this time. And what better way to learn to walk than to try to fall down?  There's no stress, no ambition, no failure involved--it's just an accident.  The whole thing was a game, not a studied effort.

Walking came about a month later, after surfacing and subsiding a few times.  She played around with the idea for a while and then one day decided it was a useful way to get around, and walked.   We could use more of this kind of learning in our lives.

By the way, there's a great Feldenkrais lesson (posted here) which uses this idea--playing around with taking yourself out of balance in order to find your balance.

Back in June, Annabelle and I were sitting outside on our wooden bench one morning. It was my favorite spring weather--cool, windy, and bright--and the leaves of the plants and trees around us were all shifting in the wind. Annabelle played with the ivy growing behind the bench. She likes plants, especially when she gets to tear them apart. She pulled leaves off the ivy growing nearby and began to push leaves down between the bench slats. She carefully watched each one fall to the ground, then picked another, turned it in her hand, and pushed it through the crack between the slats.
Finished 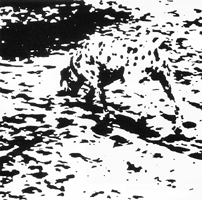 with the leaves, she crawled over to the edge of the bench and put a hand out into the air. If I hadn't caught her, she would have crawled right off the edge--she tried to lean on the air the same way her other hand was leaning on the bench still. Once she felt that there was nothing there, she could see that it was an edge and avoided it. Instead she crawled toward the armrest, but stopped and reached for it too early--it was still five inches away. She could see it and wanted to touch it, but couldn't tell that it was too far away. She moved a few inches closer and tried again, and again, until she was finally close enough to touch it. I could visualize the neurons firing like crazy in her head: she was using her sense of touch to map out her depth perception.

It's been fun, and very difficult, trying to imagine how Annabelle sees the world. My husband pointed out that her world probably looks a lot like a moving, color version of the photograph above--a barrage of visual data without much meaning. From her point of view on the bench, the edge was only a change of color until she put her hand out and felt it was an edge. Same with the bench slats, and the distance of the armrest. The visual experience didn't make sense until her sense of touch that gave meaning to what she saw.

The same is true for all of us. Maybe because we have language, and categorize or label the senses as separate, we don't see that it's really not possible to experience just one sense. The way we learned to see is not the way in which we're taught a subject in school, one at a time. It's total immersion learning. It's the way we experience the world as well, although with all of our adult filters, categorization, and labels, we think we experience the world in a much simpler way. I can get glimpses of my unfiltered experience watching Annabelle learn.

Hello!  I'm returning from maternity leave with a couple new posts.  I've been meaning to blog more frequently, but since my daughter Annabelle's birth a year ago things have been very different and busy--in a good way, mostly!  Because life and my approach to it feel so changed, I've changed the title of my blog, and the name of my Feldenkrais practice, to The Art of Curiosity.  The old title (move well=live well), implied a little too much judgment for me, and one of the things I like most about the Feldenkrais Method is its inherent lack of judgment.  I also didn't want to emphasize movement as much, since the method is also more about learning than about moving.  I'm working on a couple of new entries inspired by watching Annabelle learn, as her learning experience seems very similar to the kind of learning Feldenkrais lessons elicit.
Posted by Stacey Pelinka at 12:40 PM No comments: